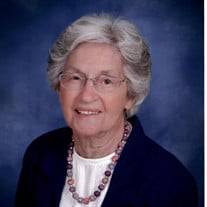 Brownie Lee (Bates) Mayberry was born on Sulpher, Hickman County, Tennessee November 8, 1922, and passed away on March 28, 2022. She was 99 years old. She was a beloved Mother, Granny, Memaw, and retired nurse. She was preceded in death... View Obituary & Service Information

The family of Brownie Lee Mayberry created this Life Tributes page to make it easy to share your memories.