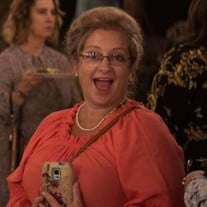 Carrie Lynn Tate was born on March 5, 1963, in Dickson, Tennessee and passed away on July 4, 2020, in Dickson, Tennessee. She was 57 years old. She is the daughter of Wallace Lee Warren and Lera Alice Allen Warren. She was preceded in death by her father, and her brother Mark Warren. She is survived by her mother. Her husband Ronald Tate. Sons Johnathan Bradley "Brad" Tate and Ryan Tate. Grandson Keelan Tate. Father in Law William Tate. Brothers and Sisters Richard Warren (Frances), Gail Sullivan (Rufus), Reba England (Dwight), Jeff Warren, and Eddie Warren. Brother and Sister in Laws Wendy Cunningham and her daughters Katie (Kameron) Hall and Aimee (Daniel Sadoski), and Buddy Tate (Angie). A whole bunch of nieces and nephews. Along with many other relatives, friends, and loved ones. Carrie was full of life. She was hard-working, and that was the only way she knew how to work was hard. Whether it be at her many titles and jobs she held at Shiloh Industries or out in the yard mowing and weed-eating, she gave 110% at everything she did. This carried over into all other aspects of her life. She was not one to ever ask for anything, and was always willing and wanting to work for what she had. Carrie was crowned Ms. Hickman county during her high school days. The outgoing never met a stranger attitude that she has probably had a lot to do with that. Along with that Carrie was also a firecracker and a fighter who was not afraid of anything or anyone. She loved music. It was not uncommon to find her singing loudly her favorite gospel or country songs. She was not afraid to insist that you would join in, even if you did not want to. One of her favorite bands was Aerosmith, and Steven Tyler was her man. She was a photographer. She spent many hours taking photos of nature. Birds and flowers particularly. She would drive the backroads for hours looking for wildflowers and wildlife to take home through her pictures. Carrie also loved her family. She was her grandson Keelan's #1 fan, his personal photographer, a personal cheerleader, and a choreographer. She was all about being a grandmother. She will be deeply missed by all those she knew and loved. Chad Sullivan and Shirley Goins will officiate services.

The family of Carrie Lynn Tate created this Life Tributes page to make it easy to share your memories.