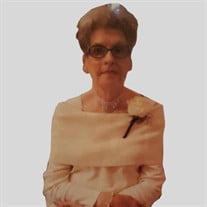 Clara Prince Garner Wright was born on September 17, 1941, in Coble, Tennessee, and passed away on June 20, 2022, at her home in Centerville, Tennessee. She was 80 years old. She is the daughter of the late Guy Garner and Willie Tom O'Guin Garner. She was also preceded in death by her husband of 42 years William T. "Only" Wright, and her sister Barbara Brown. She is survived by her sons Darren (Karen) Wright of Hurricane Mills and Kevin (Marie) Wright of Dickson. The mother of two of her grandchildren Kerry Sanders. Brother Edwin Garner and his wife Georgia. Grandchildren: Kristen, Angela (Victoria), Cameron, Christian, Kate (Landon), Chance, Ashley (Noah), Kalista, Gabby, Elijah, Arianna, and Ezekiel. Great Grandchildren: Delilah, Lyric, Princeton, Elliana, Paisley, Lillyanna, and one more on the way. Her best friends Betty and Camille Brooks and good friend from Texas, Judy Dial. Along with many other relatives, friends, and loved ones. Mrs. Clara was a member of the Shipps Bend Church of Christ. When she was working she spent time at several law offices in the Nashville area, working for the United States Census, and helping to raise money for the Hickman County Rescue Squad. Most importantly, she was a full-time mom for many years. She was very creative. Over the years she has sewn countless dresses, quilts, and dolls. She was gifted and could make anything as well or better than you would find in a store. She continued this hobby even in these last years sewing masks during the pandemic and dresses to send to those in need in Africa. Her grandchildren describe her as "Fancy", she was known to always be dressed well, have her hair done, and her make-up perfect. She spent as much time with her grandchildren as she could. She will be missed very much by all of her family and friends. Mr. Bill McDonald will officiate services for Mrs. Wright.

Clara Prince Garner Wright was born on September 17, 1941, in Coble, Tennessee, and passed away on June 20, 2022, at her home in Centerville, Tennessee. She was 80 years old. She is the daughter of the late Guy Garner and Willie Tom O'Guin... View Obituary & Service Information

The family of Clara Prince Wright created this Life Tributes page to make it easy to share your memories.