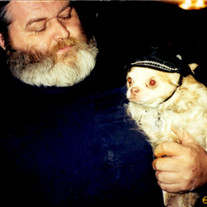 I Did It My Way Clifford W. Leteure was born September 6, 1954 to Clifford Curtis and Damaris M. Sullivan. In the early years of his life it became apparent that he was going to live his life one way, his way. He grew up with a large and loyal heart, a stubborn mind and a desire for adventure. He spent his youth building his hobbies in the outdoors, collecting, auctioning and learning the value of a good trade. Later in life he became known as the man who could leave the house in the morning with a trinket and trade his way up to a tractor by the time he came home that night. Clifford served this great Nation in the United States Navy, always a proud Patriot. Clifford met the love of his life, his loyal companion, Sue, and they married 45 years ago. They supported each other and their family in the way they always believed was right for them, their way. In January of 2004, Clifford and Sue moved from Maine to live out their dream of owning a farm in Centerville, Tennessee. They filled their property with collectibles and animals and spent their time with their family; son C.W, daughters Kimberly and Nicky and grandson C.J. (GO BULLDOGS). They spent their time pursuing joys that some would consider simpler, but they were exactly the joys that filled their hearts. Earlier this year, Clifford and Sue learned that their days together were coming to a close. They faced this news with courage together and Clifford decided that, as he had always done, he was going to do this his way. And Sue stood by him ever faithfully. Clifford W. Leteure lived a life in a full circle, he came into this world his way and he left it his way on October 19, 2020 with a full heart and his "bud" Chico on his chest. Clifford is survived by Sue, C.W. and his girlfriend Tiffany, his daughters Kimberly and Nicky, his grandson C.J. (his not so little buddy anymore), his mother-in-law June Costain "Ma C", brothers, sisters, nieces, nephews and a life time of special friends. Clifford requested that no service be held, instead he asks you all to remember him your way.

I Did It My Way Clifford W. Leteure was born September 6, 1954 to Clifford Curtis and Damaris M. Sullivan. In the early years of his life it became apparent that he was going to live his life one way, his way.... View Obituary & Service Information

The family of Clifford W Leteure created this Life Tributes page to make it easy to share your memories.

I Did It My Way