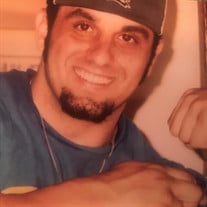 On Sunday, January 17, 2021, David A. Sharp passed from this life on to his eternal home at the age of 36. He left this earth surrounded by his family, who loved him beyond words. David was born on December 15, 1984, to Bill Sharp & Kathy (Barber) Sharp. He adored his parents, especially his dad, and they adored him. David was an exceptional kid who made an impression on everyone who knew him. He attended Lewis County Schools and was one of the greatest football players to ever play at Bobby W. Sharp Stadium. Everyone in school considered David a friend, and he considered them the same. His senior year, he was recruited by all SEC schools to play football, as well as Stanford, Nebraska, and Marshall University in West Virginia. The coach from Marshall even called David’s dad and said he had never recruited someone that far south, but he wanted David to play for them more than anything. David was an avid bodybuilder, and after much thought, he decided to attend Austin Peay State University and concentrate on that. He graduated from there with his bachelor’s degree and moved back home. He was a kind and gentle soul, always there to lean on when needed. David was a hard worker. Some would call him a perfectionist and that showed in his business, Sharp Detailing, which he started himself. There are not many cars in Hohenwald that David hasn’t cleaned up at some point in time. He was always there to help out when needed, and never let anyone go through a difficult time alone. Above all, David was a child of God, and today he has found that peace in the valley that we all long for. Along with his parents, Bill and Kathy Sharp, he is survived by his wife, Ashley Sharp, and his sisters, Darla Sharp Woolridge of Memphis, TN, and Kendra (John) Sharp Mayfield of Hohenwald, TN. His brother, Billy “Buster” Sharp, Jr., precedes him in death. Visitation with the family will be held on Sunday, January 24, from 9:00 AM-2:00 PM, at the Sanctuary First Pentecostal Church in Hohenwald. Funeral services will follow at 2:00 PM, also at the Sanctuary. Burial will follow in the Lewis County Memorial Gardens. *Masks are required during visitation and funeral services. It is requested that everyone please adhere CDC guidelines and social distancing.

On Sunday, January 17, 2021, David A. Sharp passed from this life on to his eternal home at the age of 36. He left this earth surrounded by his family, who loved him beyond words. David was born on December 15, 1984, to Bill Sharp & Kathy... View Obituary & Service Information

The family of David Aaron Sharp created this Life Tributes page to make it easy to share your memories.