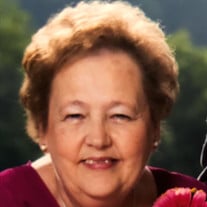 Doris Opal Roder, 76, resident of Bear Creek Trail, Centerville, died Sunday , March 1 at her residence. Funeral Services will be conducted at 2:00 PM Thursday at McDonald Funeral Home with Bill McDonald officiating. Burial will follow at Breece Cemetery. The family will visit with friends from 3:00 - 8:00 PM on Wednesday. Born April 5, 1943 in Hickman County, she was the daughter of the late Jack Tarkington and the late Elise Hassel Tarkington. Mrs. Roder completed the eleventh grade of Hickman County High School. On June 21, 1960 she married George Ray Roder. Early in her life she worked at Genesco and later at the Hickman County Elementary School cafeteria. Mrs. Roder stayed at home raising her three children. She also babysat in her home many children, each one calling her “Mamaw.” She loved each one as her own. Mrs. Roder was a member of the Hickman County Arts and Crafts Guild. She used her love and talent of drawing to make cards that she used as her personal ministry for Christ. She loved the Lord and wanted others to know the Lord. She was a member of the Nunnelly Church of Christ. Mrs. Roder loved living on the family farm in Centerville. She was known as a quiet, sweet, kind, loving spirit by all who knew her. She is survived by her husband George Ray Roder of Centerville, daughters Janese (Keith) McCeney of Franklin, Dianna Roder of Gallatin, and son Tony (Bonnie) Roder of Hampshire. Grandchildren: Kasey Allen, Austin (Sara) Allen, Elliot McCeney, Caleb McCeney, Callie McCeney, Cole Davis, Abby Davis, Sadie Roder. Greatgrandchildren: Koehn Allen and Jax Allen. Brother: Perry (Maxi) Tarkington. Nieces: Rhonda Cox, Tina Danson, Vickie Pickle, Pamela Magee, and Jackie Owen. In addition to her parents, she was preceded in death by her sister, Devetta Murphy and niece Karen Murphy. Active pallbearers will include Will Chessor, Austin Allen, Houston Mayes, John Stewart, and Jeff Gammons.

The family of Doris Opal Roder created this Life Tributes page to make it easy to share your memories.