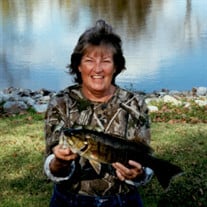 Dellie Earline Gatewood Warren of Nunnelly passed away on Thursday, April 15, 2021, at the age of 66. Earline was born on September 28, 1954, in Dickson County to Elbert (Buster) & Floy Cude Gatewood. Earline graduated from Hickman County High School in 1972 and went on and studied nursing at Columbia State Community College. She began her nursing career at Hickman Community Hospital where she worked for 38 years before retiring. On May 23, 1987, Earline married Bill Warren, and together, they had a son, Lan. Earline had a passion for cooking, gardening, fishing, and cross stitching. When not enjoying one of her favorite past times, you could find her spending time with her grandson, Levi. Earline was preceded in death by her parents, Buster and Floy Gatewood; and her sister, Melinda DeVore. She is survived by her husband, Bill Warren; her son, Lan Warren, and his wife, Emily; her grandson, Levi Grayson Warren; her step-son, Billy Warren, Jr. and his son; her step-son, Jason Warren and his children; her brother, Gary Gatewood, and his wife, Becky; her brother, Ronny Gatewood, and his wife, Judy; her brother, Tim, and his wife, Donna; and a host of other friends and relatives. Visitation with the family will be on Friday, April 23, 2021, from 3:00 p.m. to 8:00 p.m. and from 11:00 a.m. to 1:00 p.m. on Saturday, April 24th, at McDonald Funeral Home in Centerville, Tennessee. Funeral services will be held on Saturday, April 24, 2021, at 1:00 p.m. at McDonald Funeral Home with Wanda Turner and Bill McDonald officiating. Burial will follow services at the Lowes Bend Cemetery in Nunnelly, Tennessee. All expressions of sympathy, including flowers, cards, and funeral expense contributions, are all welcome. If you would like to assist with expenses, monetary contributions can be made to the Warren family.

The family of Earline Warren created this Life Tributes page to make it easy to share your memories.

Dellie Earline Gatewood Warren of Nunnelly passed away on Thursday,...