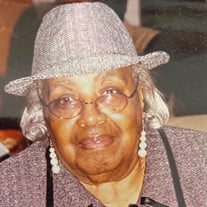 Ella Mai Woolridge was born on May 21, 1932, in Hickman County, TN to the late William “Clyde” Satterfield and Mary Louise Perkins. She departed this life on January 11, 2022, at Centerville Health and Rehabilitation Center. In addition to her parents, she was preceded in death by her husband of many years, Hugh “D’ Woolridge, brother Raleigh Goodman and sister, Bettie Sue Dobbins. She professed a hope in Christ at and early age and was a faithful member of the Centerville Church of God, Sanctified. For over 70 years she served in multiple ministries including the Mother Board, the Church Choir, Usher Board, Food and Hospitality Committee as “The Boss”. She had a special interest in supporting the youth in every capacity of the church. Ella Mai was educated in the O.H. Bernard School System in Centerville, TN. She was employed in the manufacturing industries at Genesco Shoe Co. until its closing. She later worked in the health care field at the Centerville Health and Rehabilitation Center (Centerville Life Care Center) and food services at Hickman County High School. Ella Mai had a special place in her heart for the children and elderly. They were always welcomed in her home where they could find a good meal and “lively” conversation. She was known for hosting the annual Third Sunday in July Reunion festivities. Ella Mai was a known “Fashionista” with her extensive hat collection. Her hobbies included cooking, traveling, and supporting the Tennessee Titans. She leaves to cherish her memories one daughter, Ruby Woolridge Peters of Centerville, TN, and one foster daughter Nellie Joe Mayberry of Richmond, IN.; one grandson, Elcassius Jones (Roneka) of Louisville, KY; one foster grandson, Kenneth “Elgin” Frye of Carlisle, IN; three great-grandchildren, Demichael, Realyn, and Layla Marie of Louisville, KY; two god-granddaughters, Qiana Easley and Keisha Walker of Centerville, TN and one god-grandson, Keenan Walker of Jackson, TN; one sister, Emma (Jeffery) McClain of Hanover, MD, and one step sister, Teresa Perkins of Dickson, TN; one brother, Brownie Carter of Columbia, TN and one step brother, Sam Henry Carter of Hanover, MD; two aunts, June Brown Walker and Carolyn Johnson of Centerville, TN; one sister-in-law, Margaret(Johnny) Booker of Hohenwald, TN and a host of nieces, nephews, cousins, and friends.

Ella Mai Woolridge was born on May 21, 1932, in Hickman County, TN to the late William &#8220;Clyde&#8221; Satterfield and Mary Louise Perkins. She departed this life on January 11, 2022, at Centerville Health and Rehabilitation Center. In... View Obituary & Service Information

The family of Ella Mai Woolridge created this Life Tributes page to make it easy to share your memories.