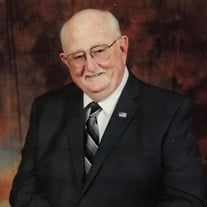 Elmer Eugene Carathers was born on January 17, 1936, in Floydada, Texas, and passed away on March 9, 2021, at his home in Centerville, Tennessee. He was 85 years old. He is the son of the late Elmer D. Carathers and Mildred Waldeen McPeak Carathers. He was also preceded in death by his sister Frances Lewis. He is survived by his wife of 38 years Ruth Ann Rochelle Carathers of Centerville. Sons James Dean Carathers (Debbie) of Smyrna, John Thomas Carathers (Kathie) of Bumpus Mills, Tennessee, and Robert Lee Carathers (Sarah) of Spring Hill, Tennessee. Daughter Mary Ann Monday (Larry) of Nunnelly, Tennessee. Step-Daughters Tina Lynn DeVore (Russell) of Fairview, and Tracey Rochelle Outman (Matthew) of Old Hickory. Step-son Christopher Neil Martin of Lyles. Grandchildren Ashley, JaDee, Johnny, James, Natasha, Phillip, Brittney, Dalton, Emily, Lynette, Katie, Claire, Kendall, Sorrell, Madelyn, and Alyssa. Great Grandchildren Lila, Brody, Lucy, Wyatt, Ethan, Alice, Luke, Taylor, Danielle, and Beau. Several nieces and nephews. Along with many other relatives, friends, and loved ones. Mr. Carathers worked for 38 years for the Ford Glass Plant as a Millwright and a maintenance supervisor. He was a member of the Fairfield Church of Christ. He was also a Mason and a Shriner. He has been a member of the John B. Garrett Lodge 711 in Nashville, Tennessee. He was a member of the Shriner Horse Patrol. He was a proud patriot and served in the National Guard. He loved to hunt deer. He loved collecting many things including guns, knives, Confederate Civil War memorabilia, and guitars. He was very creative and made over 50 guitars, many knives, and custom saddles. He also customized several of his guns in his collection, which also included a number of original antiques. Mr. Carathers was also a musician, he was offered a 4 years scholarship to play trombone at Belmont University. He then later took up playing and picking guitar, which naturally led to making his own. When he saw something that he wanted he would come home and set out to make it himself. He was a loving husband, father, and grandfather and will be missed by all of those who knew and loved him. In lieu of flowers, donations can be made to the Shriners Hospital.

Elmer Eugene Carathers was born on January 17, 1936, in Floydada, Texas, and passed away on March 9, 2021, at his home in Centerville, Tennessee. He was 85 years old. He is the son of the late Elmer D. Carathers and Mildred Waldeen McPeak... View Obituary & Service Information

The family of Elmer Eugene Carathers created this Life Tributes page to make it easy to share your memories.