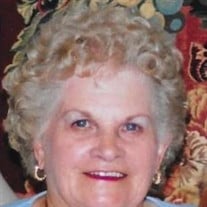 Floy Mai Cude Gatewood of the Nunnelly community in Hickman County, passed away on Sunday, March 21, 2021, at the age of 92. Floy was born October 2, 1928 to Jim D. & Dellie (Smith) Cude on Nubbin Ridge, now known as Piney River Rd. in Hickman Co. As a child she attended the schools at Taylor Creek and Nunnelly going through the tenth grade. Floy's mother died when she was only 10 years old. She and her beloved sister, Mary, spent most of their time helping their father provide care for their three invalid brothers and working the family farm. On September 8, 1951, she married Elbert (Buster) Gatewood from Rogers Springs, Tn. He was a construction worker for the Nashville Bridge Company, and together they had three sons- Gary, Ronny, Tim, and two daughters, Earline and Melinda. Floy, a devoted homemaker, mother, and caregiver, also found great enjoyment in working as a nurses assistant from 1981-1993 at the Hickman County Nursing Home. She had a passion for quilting, cooking, and gardening. During her lifetime, it is believed that she made 80 quilts, many of which were given as gifts or to help those in need. She was an active, involved member of the Nunnelly United Methodist Church, the Nunnelly Community Center, and served on the Board of Directors for the Lowes Bend Cemetery. Floy was preceded in death by her parents, Jim D. and Dellie Cude; her brothers- J.D., W.T., and Roy Cude, her sister, Mary Ashworth Reeder; her husband, Buster Gatewood; and her daughter, Melinda DeVore. She is survived by her children- Gary (Becky) Gatewood; Earline (Bill) Warren; Ronny (Judy) Gatewood; Tim (Donna) Gatewood-six grandchildren- Brett (Katie) Gatewood; Megan (Robert) Kent; Lauren (Corbin) Barr; Emily (Justin) Atkinson; Lan (Emily) Warren; and Ryan (Alyssa) Gatewood: seven great grandchildren- Avery and Hannah Kent; David and Ben Gatewood; Tate Atkinson; Paisley Gatewood; and Levi Warren; and several nieces and nephews. Floy was a strong, caring, Christian woman committed to serving others and especially her family, whom she loved dearly. As she stated, " When God gives you kids, He gives you a gift you will never forget and a love you will always hold on to." She was a light to all who crossed paths with her and an inspiration to many. She leaves her family a deep-rooted, rich legacy of courage and love. Services will be held on Friday, April 2, 2021, at 1:00 p.m. with visitation on Thursday from 3:00 p.m. to 8:00 p.m. and from 11:00 a.m to 1:00 p.m. on Friday all at McDonald Funeral Home in Centerville, TN. Rev. Jim Melrose and Wanda Turner will officiate services. Burial will follow services at the Lowes Bend Cemetery in Nunnelly, Tennessee. In lieu of flowers, donations can be made to the Lowes Bend Cemetery Fund, to the Nunnelly United Methodist Church, or the Centerville Church of Christ Day School. A live stream of services can be viewed at https://www.facebook.com/McDonaldFH.

The family of Floy Mai Gatewood created this Life Tributes page to make it easy to share your memories.