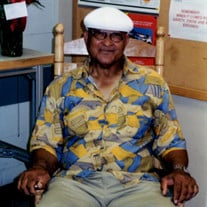 Fred Hornbeak was born on September 10, 1936 to the late Jim and Gladys Sowell Hornbeak of Wrigley, Tennessee. Fred confessed Christ as his Lord and Savior at Worley Furnace Missionary Baptist Church in Dickson, Tennessee. He attended Worley Furnace Church until his health declined. Fred received the call from our Heavenly Father on Monday April 26, 2021 at TriStar Horizon Medical Center in Dickson, TN. Fred attended the Hickman County School in Wrigley, Tennessee. He worked for many industrial companies throughout his lifetime. Fred retired from France in Fairview, Tennessee after working there for 25 years. Fred was an entrepreneur, for many years Fred brought entertainment to his establishment Fred's and then built another establishment naming it Fred's Disco. People would come from surrounding cities every weekend to enjoy a night on the Town and that Town was called "Wrigley”. He often kept a packed house. When Fred talked about his establishment, he would always say "The Place”, that's how he related to his business when conversing with other people. You could always tell that he was proud of his accomplishments. Fred loved to go fishing, hunting, eating and he loved watching the Tennessee Vols Football Team Play. He was a die-hard Fan of Tennessee. Fred would not leave his home without his University of Tennessee attire. He loved UT so much that he painted his Birdhouse and Shed with the Tennessee color orange. Fred was preceded in death by his parents Jim and Gladys Hornbeak Sowell. Sisters: Henreitta Sowell, Odessa O'Neal, Rena Terrell, and one brother Jimmy Hornbeak. Fred leaves to cherish his memory: 2 sons Lee Warren Hornbeak of Lyles, TN, and Perry Huddleston of Hermitage, Tn; Brothers: James Lee Hornbeak ( Alma) of Lyles, TN, Bobby Sowell (Rosalind) of Dickson, TN, and Torez Sowell Lyles, TN. Sisters: Tishie Mae Ramey of Dickson, TN, and Joyce Stone of Lyles, TN. Brother in laws: Johnny Elliott of Nashville, TN, John Terrell of Franklin, TN, and Gene O'Neal Atlanta, Ga; Sister in laws: Barbara Sowell of Lyles, TN, Roberta Hornbeak of Lyles, TN and Lynette Russ of Nashville, TN. He also leaves five grandchildren, and thirteen great grandchildren. Fred also cherished a host of devoted friends Douglas Gipson, Eddie Hornbeak, James Taylor, Geraldine Hornbeak, and a host of nephews, cousins and friends and a devoted care giver sister Joyce Stone. A live stream of services can be viewed at this link: https://us02web.zoom.us/j/82796449789

The family of Fred Nathaniel Hornbeak created this Life Tributes page to make it easy to share your memories.