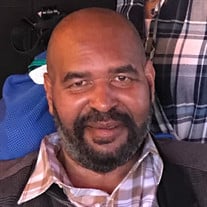 Fredrick received the Master’s call early in the morning on June 10, 2020 at the Alive Hospice Murfreesboro, TN. Fredrick was fondly known by his family and friends as Fred, Yip, or “Squeaky” (which was a nickname given by his father). Born on January 19, 1959, as the third of six children born to the union of Charles Edward and Mary Francis Frazier, Sr. whom precedes him in death. “Yip” was born in Dickson, TN and spent his childhood among family and friends in the Wrigley Community. While convalescing at NHC Dickson he accepted Christ and was baptized at the Pomona Church of Christ Dickson TN. While at NHC he faithfully attended their Sunday church services until he moved to Nashville to an independent living facility. Fred at times could be a “gentle giant” with an infectious smile, and at other times he could be a warrior and protector of his family. He enjoyed fishing, hunting softball and was a member of the Wrigley team. Most of all he loved spending time with his friends and family. He is preceded in death by his parents, grandparents Robert and Eugenia Gipson and Richard and Sarah Frazier. Preceding him also in death is his oldest sister Linda Frazier and brother Anthony Frazier. Those left behind to cherish his memories are sons: William (Willie) Frazier, Waynesboro, TN and Steven Williams, Lyles, TN. Grandchildren: Maya Frazier and Carter Frazier. Cherishing a lifetime of memories are his siblings: Charles (Charlayne) and Robert (Gwendolyn) Frazier, Murfreesboro, TN; Willie Frazier, Knoxville, TN; Chiquita (Michael) McGuire, Mt. Juliet and Kysa (David) Lomax, Linden, TN. One uncle Douglas Gipson; Nieces and Nephews: Eugenia Frazier, Marcus Frazier, Talisha Scates-Cook, Aaron Frazier, Johntae Hughes, Antonio Frazier, Demetre Yarbro, Brandon Jones, Kayla McGuire, Fabin Springer and Montae Springer. A host of great-nephews and nieces, cousins and friends too numerous to list and Nicole Brown and sons Troy and Antonio "whom he thought of as a daughter". Special friends and staff at Choices Residential Home in Nashville which soon became his family to him Rodney, Connie, Greg, Jessica, Malachi, David, Beatrice, Nikki and Asha. A special thank you to the doctors, nurses and staff at Alive Hospice Murfreesboro.

Fredrick received the Master&#8217;s call early in the morning on June 10, 2020 at the Alive Hospice Murfreesboro, TN. Fredrick was fondly known by his family and friends as Fred, Yip, or &#8220;Squeaky&#8221; (which was a nickname given by... View Obituary & Service Information

The family of Fredrick Eugene Frazier created this Life Tributes page to make it easy to share your memories.

Fredrick received the Master’s call early in the morning on June...