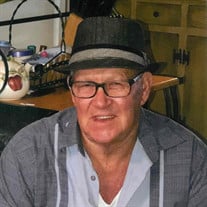 Mr. Glenn Harper, born February 14, 1943, to the late Elvis Ezra Harper & Virgie Mary Hensley, passed away at his home, surrounded by his family on Monday, April 4. Completing only the 7th grade Mr. Glenn went straight to work, working at numerous local sawmills. On March 5th at only 18 years old, he married Mrs. Shirley Quillen, who at that time was only 15 years old. And just one month ago they celebrated 61 years of marriage. Mr. Glenn went on to work for the State Highway Department for 13 years, retiring in 2008. After retirement, he absolutely loved to haul off old scrap iron, most Thursdays you would see his little old white Chevrolet, with a small trailer behind it loaded down with scrap metal and Mrs. Shirley in the passenger seat, headed to Lawrenceburg. He would tell you that was his "eating out" money, as he and Mrs. Shirley would usually stop at Dairy Queen or someplace in Lawrenceburg and eat out together. Mr. Glenn loved the simple things in life, was an absolute treasure to be around, someone who treated everyone, just like they were family. He loved God, and he loved being at Church, worshipping with the Blondy Church of God for more than 45 years. One of his favorite things to say was "Give me just 5 more minutes." He will surely be missed by all those that had the pleasure of knowing Mr. Glenn. He is survived by his wife Mrs. Shirley Harper, son Keith (Debbie Tenison) Harper, Daughter Glenda James & husband William, 5 grandchildren Travis (Brittany) Carroll, Derick (Breena) Carroll, Morgan (Devon) Brewer, Hayden (Janna) Harper & Ian Harper, 9 Great Grandchildren Tyler Carroll, Harper Carroll, Levi Carroll, Austin Staggs, Rawlin Carroll, Evie Brewer, Hendrix Brewer, Hawkins Brewer & Jovie Brewer. Also nephews Larry Wayne (Duchess) Harper, Richard Harper & Lester (Elizabeth) Calvert. Along with his parents, he is preceded in death by his brother, Ezra Lee Harper, and his sister, Aileen Calvert. Services for Mr. Glenn Harper will be held at the Blondy Church of God, Visitation with the family will be held on Tuesday evening from 5:00 PM - 8:00 PM, and Funeral Services will be conducted on Wednesday beginning at 10:00 AM. Burial will follow in the Downey Cemetery.

The family of Glenn Douglas Harper created this Life Tributes page to make it easy to share your memories.