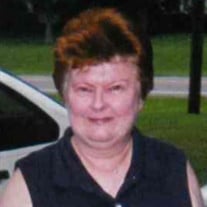 Mrs. Gloria June Woods was called from her earthly home in the early morning hours of October 11, 2021, to her eternal home with Jesus. Gloria was born in South Bend, IN, on June 12, 1944. On a late afternoon in May of 1968, Gloria was sitting on a porch and asked God if there was anyone out there for her. She suddenly heard a voice say yes, I'm right here. It was her soon to be husband of 54 years, Tom Woods. She would later have two boys, Stacy and Tracy, whom she loved dearly. Gloria never met a stranger. She would avidly worry about others and their souls. She would always tell people about Jesus. Jesus was her passion. She loved him so much she wanted to share that love with others. She wanted to make sure she planted as many seeds as she could. For a long time, Gloria was the only one who went to church. She attended Blondy Church of God for 16 years before she moved to Sweet Water House of Prayer where she has been a member for the past 7 years. She never gave up on praying for her family to one day be sitting beside her in church and knowing the Jesus she knew. One day she turned around in church and there sat a grandson. A few months later she walked in to see one of her son's and his family. A few months went by, and her husband got up and got ready and went to church with her. I believe you could see Jesus beaming off her at times during service as she looked around and saw most of her family sitting in church with her and knowing Jesus had answered her prayers. She was going to have her family in heaven with her one day. Gloria is survived by her husband, Tom Woods, Sons and daughter-in-law Stacy, Stephanie, and Travis Woods. Grandchildren, Alex Allen of Savannah, TN, Stony Woods of Newport, NY, Addison Woods, Johnny Woods, Jordan Woods, Bea Woods, Grace Woods, and Jesse Johnston. Great grandkids Presley, Chanley, and Rylan Allen. Brother Dave Hook of South Bend, IN, and sister, Marilyn Henderson of White Pigeon, MI. Gloria is preceded in death by her father and step mother Lloyd and Evelyn Hook, mother and step father Ardis and Pete Tackis, son Melvin Johnston and great granddaughter Luxley Allen. Visitation with the family will be held on Wednesday, October 13, 2021, from 5:00PM-8:00PM in the McDonald Funeral Home Chapel. Funeral services will be held on Thursday, October 14, 2021, at 4:00PM, in the McDonald Funeral Home Chapel. Brother John Rawdon will officiate. Burial will follow in the Lewis County Memorial Gardens.

Mrs. Gloria June Woods was called from her earthly home in the early morning hours of October 11, 2021, to her eternal home with Jesus. Gloria was born in South Bend, IN, on June 12, 1944. On a late afternoon in May of 1968, Gloria was sitting... View Obituary & Service Information

The family of Gloria June Woods created this Life Tributes page to make it easy to share your memories.

Mrs. Gloria June Woods was called from her earthly home in the...