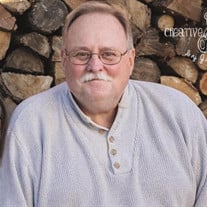 In the loving memory of John Gregory McCord,“Greg”, “Coach” and “Papa” Boy, Boy, Boy.... John Gregory McCord made his entrance into this world on January 10, 1957, in Centerville, TN to Wilbur J. and Martha Ann Owens McCord. Greg spent his first years in Centerville, TN then moved to Nashville with his family where he attended school. He enjoyed playing basketball in high school and was a very talented point guard for the Glencliff Colts. After graduation, Greg attended Lipscomb University and worked at the Boys and Girls Club where he met the love of his life, Karen Elizabeth Hollett, in 1977. They were married in 1979. He continued his education at Trevecca University for counseling and at Tennessee State University, earning his master's degree in education administration. He spent four decades educating the youth of Hickman County, ministering from the pulpit, directing church camps, and coaching basketball. He was a loving, dedicated father to John Michael McCord and Jana Michelle McCord Buttrey. Greg enjoyed many hobbies including taking trips to Gatlinburg, fishing, camping on the Piney River, woodworking, collecting antiques, playing his guitar, singing, decorating for Christmas, attending ball games, and playing with his dog Packer. He is survived by his wife of 42 years, Karen Elizabeth McCord, mother Martha Ann Owens McCord, two older brothers, Randel McCord (Centerville) and Russell McCord (Murfreesboro), child of 38 years John Michael McCord (Kayla), and child of 34 years Jana Michelle McCord Buttrey (Hunter), and their children. His true passion came later in life in 2013 when his first grandchild was born. He had five beloved grandchildren, Callan Everett McCord, Adilene Tennessee Buttrey, Henley Pearl Buttrey, Amalie Grace McCord, and John Scott Buttrey. Greg passed away peacefully at his home surrounded by his family on April 27, 2022, at the age of 65. To know him was to love him, and boy did he love everyone with his whole heart. In lieu of flowers, donations can be made to Camp Meribah or to the Pinewood Church of Christ. Donations can be dropped off at the office of McDonald Funeral Home or the Centerville Church of Christ. The family kindly requests that those in attendance wear a mask while visiting.

The family of Greg McCord created this Life Tributes page to make it easy to share your memories.

In the loving memory of John Gregory McCord,“Greg”, “Coach” and...