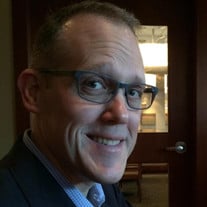 John Howard Beard passed away peacefully at his home in Germantown, Tennessee after a long battle with cancer. John fought the good fight, finished the race, kept the faith, and is now reaping his reward in Heaven. He is married to his beloved wife Lezlee (Dabbs) Beard of almost 19 years and they have one son, Hudson Cotton Beard, who is 15 years old. John grew up attending Beaverdam Springs Church of Christ in Centerville, Tennessee where he wrote in his journal about having such great childhood memories and Sundays were all about church, family, and food at his Grandma Talley’s house. He also attended Gordonsburg Church of Christ in Hohenwald on Wednesday and Sunday nights before moving to Knoxville to attend graduate school. While in Knoxville he was a faithful member of Ault Road Church of Christ, then West Valley Church of Christ where he made many lifelong friends. Southside Church of Christ was his and his family’s church home for six years where they were loved and cared for and met many more lifelong friends. After leaving Shelbyville and moving to Valparaiso, Indiana for John’s work with MonosolRX they attended church at Vale Church of Christ. The family moved back to their beloved Tennessee where John worked as a Manufacturing Engineer II in Product Trauma for Smith and Nephew. When first moving to Germantown he lived with Sequoia and Herbert Henson (whom he loved very much and they took great care of him until his son finished fifth grade and Lezlee and Hudson could join him in the Memphis area.) While living with them he attended Great Oaks Church of Christ in Cordova. After moving to Germantown, John and his family found a church home at Germantown Church of Christ. Much like Southside, the minute John and his family walked into this church family they knew they had found their place to serve, love God, and a group of Christians who love and care for each other and cared for them with such love and generosity while John fought his battle with cancer. John graduated from Nashville Tech with an associate’s degree in architecture, graduated from Austin Peay University with a bachelor’s degree in Manufacturing Engineering, and furthered his college career by graduating from the University of Tennessee in Knoxville with a Masters in Textile Science and Non-Woven Polymers. John put God first, his family and friends second, and everything else after that. He was loved for his kind smile, his goofy sense of humor, the way he never met a stranger and treated everyone with love and respect. He loved the outdoors and enjoyed riding bicycles with his son and nephews, fishing, canoeing, and taking his niece on special outings. He shared a love of cars and they were discussed often with his “little” brother Trysten Sherwood along with their faith in God. He and his “big” brother Chris Bobo loved UT football and talked about football, music, and their shared faith in God. In addition to his wife and son, he is survived by his parents Gary and Norma (Talley) Beard, a sister Shelia (Keith) Plunkett, Aunt Lucille Talley, Aunt Orpha Easley, Uncle Howard (Christine) Talley. Mother-in-law Linda Cotton (Jerry) Basinger and Father-in-law Larry (Janice) Dabbs. Brother-in-law Lincoln (Tiffany) Dabbs, Brother-in-law Lantz Dabbs, nephews Neison Dabbs, Avery Dabbs, Cooper Dabbs, Macartney Dabbs, Knox Dabbs, and niece Emery Dabbs. He is also survived by many loving cousins. He is preceded in death by his grandparents Uel B. and Lillie (Canady) Beard and Britt and Alice Mae Talley. As well as, grandparents-in-law Allton Lee and Bernice Virginia (Peevyhouse) Dabbs and Marvin Eunice and Martha Vera (Dunn) Cotton. As well as Uncle Rex Talley, Uncle Paul Talley, Uncle Monroe Talley, and Aunt Opal (Talley) Whittle. If anyone would like to give a donation in memory of John, his favorite charities he donated to were the church of Christ Disaster Relief Fund, and St. Jude’s Children’s Hospital. There is also an education fund set up for Hudson and any donation can be made at any Regions Bank referencing account #5267.

John Howard Beard passed away peacefully at his home in Germantown, Tennessee after a long battle with cancer. John fought the good fight, finished the race, kept the faith, and is now reaping his reward in Heaven. He is married to his beloved... View Obituary & Service Information

The family of John Howard Beard created this Life Tributes page to make it easy to share your memories.

John Howard Beard passed away peacefully at his home in Germantown,...