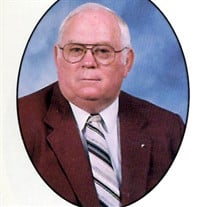 Len Watson Womack, Jr June 24, 1937 - August 9,  2020 Len Watson Womack, Jr. was born on June 24, 1937 to Len Watson Womack, Sr. and Margaret Wakefield Womack, and passed from this life on August 9, 2020.  He is survived by his wife of 60 years, Annis Blevins Womack, two daughters Laura Taylor (Randall), Lynette McKinley (Jeffrey), and a son Stephen Womack (Susan).  He is also survived by 7 granddaughters: Kathryn McKinley, Laura Beth Simpson, Caroline Krantz, Abigail McKinley, Emma Womack, Lera Womack, and Belle Womack. Most of those who knew him from his youth remember him as Bud. He was preceded in death by an older twin brother, Glen, who died in infancy and two younger brothers, Mike (2010), and Sam (2018). He is survived by his brother William. Len’s reach was wide.  If he knew you, it is likely he remembered your birthday and could tell you on what day of the week you were born. He served many years as a deacon of the Centerville Church of Christ where he taught youth Bible classes and worked in the audio/video ministry.  He was a strong supporter of the library and long served on the Hickman County Library Board. He served several terms as an alderman for the City of Centerville and was a member of the Kiwanis Club. He retired from the Tennessee Forestry Service after many years of service and assisted with planting numerous trees in Hickman County. If you attended Hickman Middle School, the trees growing behind it were provided by him. One of his joys was serving and educating youth. He spent decades serving at Forestry Camp, 4-H Camp, and Camp Meribah. He also served as a member of the Boy Scout Review Board.  Many will remember him  playing Smokey the Bear in schools or telling his series of environmentally conscious stories about Buckshot the Frog. One of his greatest appreciations was for his alma mater, Sewanee University, which he remembered with great fondness. He never met a fish fry or a bowl of ice cream he didn’t like.  He was a friend to many. There will not be an official funeral service, instead there will be several family memorials during which his ashes will be spread across areas important to his life.   In lieu of flowers please consider donating in his memory to the Hickman County Library or the Churches of Christ Disaster Relief Effort. http://www.disasterreliefeffort.org You could also plant a tree in his memory.

The family of Len Watson Womack Jr. created this Life Tributes page to make it easy to share your memories.