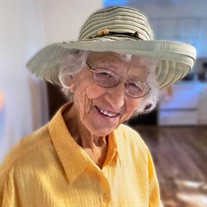 Martha Nelle McClearen King, age 92, passed away peacefully on Dec 13th in Nashville, TN. Nelle was a woman whose life was dedicated to her Family, and to God. And to the land where she was born and raised in Farmers Exchange, Hickman County, Tennessee. She was born in 1929 in Farmers Exchange, attended the three-room school there until the 10th grade, (her mother, Miss Annie, was her teacher), and graduated from Hickman County High School in 1946. She did her undergraduate studies primarily at Austin Peay, though at one point she took 2 years off so that her mother could finish college. From there, she went on to Nursing School at Louisville General Hospital, Louisville KY, where she graduated Oct 11, 1956. Education was very important in Nelle's family - every one of her siblings was also a college graduate, pretty unusual for the times. In 1953, she married Johnnie (John O’Leary) King. They were married 38 years. His jobs moved them all over the world. Some of the highlights of their travels included Italy, Switzerland, California, Texas, Michigan and New Mexico. When home in the United States, Nelle worked diligently in several different hospitals. Her nursing career began in pediatrics at Stanford University Hospital. Ultimately she focused on psychiatric nursing, and she retired from Centennial Hospital in 2000. Nelle and Johnnie were told they could not conceive, but surprisingly they did 16 years into their marriage. She was about to undergo surgery to remove a tumor, but refused to do it without her husband there (flight delayed due to weather). This delay allowed a young resident to be curious and test for pregnancy, which indeed she was. It was probably at this moment that she also conceived her passion for the lives of unborn children. She was a seeker of knowledge, and passionate about sharing any knowledge acquired. She made multiple copies of everything she deemed important, and then mailed out the copies (which were not always welcomed by the recipients!). Her family had to buy her a copy machine to keep her from going to Kinko’s several times a week. She was an evangelist and loved telling anyone she met about God’s love for them. There were very few people she encountered that did not get a “Jesus loves you, and there’s nothing you can do to change that” from her. She is legendary in Hickman County as a fierce defender of land and water, helping to found HALT (Hickman Against Lethal Trash) at a time when a toxic waste dump was being proposed for the Brushy community. Needless to say, the toxic waste dump plan was halted. She was a founding member and devoted supporter of Pleasantville Volunteers (Fire and Rescue), and a dedicated supporter of the Bethel Cemetery in Farmers Exchange. She was very active in the Tennessee Right to Life and served as a regional coordinator for Hickman and Lewis counties for many projects in that organization. Her passion for unborn children was unprecedented. She felt that every letter she mailed was a possible way to reach people. She had two custom rubber stamps made, so every envelope she sent, and every check she wrote bore these two messages “Abortion kills Children” and “Children are the message we send to a time we will not see”. For the last six months, she added a handwritten message, “Please pray for an Annual Children’s Day based on the Holy Bible” - she had hoped that Children’s Day would become a National Holiday in the United States during her lifetime. She was a member of Bethel United Methodist Church in Farmers Exchange until it closed in June, 2016. She was also a member of Christ Fellowship in Nashville. Nelle was the daughter of Lloyd and Annie Russell McClearen of Farmer's Exchange. She is predeceased by her brothers, Lloyd Edward, Harber Addison, James William, Austin Graham, and John Martin, and by her sisters, Mary Elizabeth, Annie Russell, Emma Jean, and Lloydette. She is survived by her son, John Karajan O’Leary King, her daughter in law, Ginny (Oxford), grandson, John Harber, sister, Suzanne, and many nieces, nephews, and grand nieces and nephews, who will all miss her very much. There will be a memorial service for her next year, probably spring or early summer.

Martha Nelle McClearen King, age 92, passed away peacefully on Dec 13th in Nashville, TN. Nelle was a woman whose life was dedicated to her Family, and to God. And to the land where she was born and raised in Farmers Exchange, Hickman County,... View Obituary & Service Information

The family of Martha Nelle McClearen King created this Life Tributes page to make it easy to share your memories.