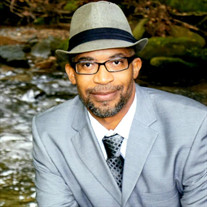 Michael Tyrone Newsom was born on March 2, 1964, to Tyrone and Marie Newsom in Nashville, Tennessee and was called home on May 12, 2022, at Summit Medical Center. He was 58 years old. Mike spent most of his life traveling around the world, as his father was in the military. Later he graduated form high school in Nashville, TN and started work. Mike met his wife, Nancy, in 2000 and they later married and moved to Centerville. He loved being in the country and sharing vegetables he grew and purchased to take back to his family in Nashville. His passion was working outside in the yard or on CARS. Taking apart or putting it together, Mike and his brother, best friend, Joe Dansby, Jr.would laugh and catch up on the latest things going on in both their lives. Mike loved his work family at BPI and often talked about things that were going on there. His wife is going to miss his daily calls on the way to work, during his lunch break, and then on his way home and his thoughtful text when he thought she needs one. Although Mike lived in Centerville he took time to be a doting son and brother, by keeping his mom's yard clean, getting her and his sister Captian D's or MiCocina's when they wanted it, and taking off work to get his mom to doctor's appointments. Mike loved being a father to his son, Michael Newsom Jr. and would call or text him every day. As a Pawpaw, Mike loved spoiling his six grandkids; Mahalah, Camille, Victor, Kaleis, Mikey and Ma'Kayla. Being a stepfather to Nashika and Adam, Mike was always willing to work on Nashiki's car and take Nancy to see her son. Left to mourn his passing are his mom; Marie Newom, his mother in law Rosella Dansby, his wife Nancy Dansby-Newsom, his son Michael (Megan) Newsom Jr. and stepson; Adam Dansby, his stepdaughter Nashika Dansby, sisters and sisters in law ;Kimberly Newsom, Donna Reels, Zella ((Bill) Davis, and Rosetta Dansby; his brother (best friend) Joe (Shirley) Dansby, Jr. and his brothers in law Joe, Abby, William, and David Dansby. Many more aunts, uncles, cousins and friends.

Michael Tyrone Newsom was born on March 2, 1964, to Tyrone and Marie Newsom in Nashville, Tennessee and was called home on May 12, 2022, at Summit Medical Center. He was 58 years old. Mike spent most of his life traveling around the world,... View Obituary & Service Information

The family of Michael Tyrone Newsom Sr. created this Life Tributes page to make it easy to share your memories.