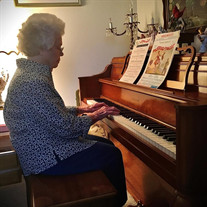 Mildred Louise Bridges, of Centerville, was born April 24, 1924, at the home of her parents, Oscar Franklin and Maud Dickson Boling, in Center Point, Chester County, Tennessee. During the fall of 1924, her parents sold their farm in Chester County and bought another farm at Morris Chapel in Hardin County, the birthplace of her father. In 1930 her father bought a piano and Mildred (aka Biddie) learned to play and was a lifelong player. Biddie grew up in Morris Chapel and graduated from Morris Chapel High School in 1942 where she played basketball all four years. On Christmas Eve 1943, she married the love of her life, Lloyd Grantham Bridges in Tupelo, Mississippi. They had one week together before Lloyd left for his four-year service in the Army Air Force in WW2. After Lloyd left, Mildred and her sister moved to a boarding house in downtown Nashville and she began working as a shipping clerk at the Vultee airplane factory. Once Lloyd returned from the war, they joined Mable and “Mac” McDonald in Centerville where Lloyd worked with Mac in the newly purchased funeral home. Mildred began working at Genesco where she became the floor manager over the Skyving department. After Genesco closed, she found her work home at Meriwether Lewis Electric Cooperative and was their receptionist for 22 years. Life in Centerville was natural for Mildred as she attended the United Methodist Church and played the piano or organ for many years. Once it became known that she was very gifted with musical talent, she was in demand for playing at weddings and funerals in the years to come. Not having children of her own, she became a second Mother to Mable’s three boys, Bill, Ken, and Bob. She was also like a grandmother to their children. Mildred was the classic southern lady who loved her family and her community, and most of all her sweet, gentle spirit was loved by all who knew her. In addition to her parents, Mrs. Bridges was preceded in death by her husband of 71 years, Lloyd Grantham Bridges, her sisters, Emily "Aunt Kenny" Wilkens and her husband Freeman, Mable McDonald and her husband W. E., and Jean Townsend and her husband Harrell, and her brothers, Howard Boling and his wife Euramae, and Sam Boling and his wife Eva Lou, and Ovid Boling and his wife Mildred.

Mildred Louise Bridges, of Centerville, was born April 24, 1924, at the home of her parents, Oscar Franklin and Maud Dickson Boling, in Center Point, Chester County, Tennessee. During the fall of 1924, her parents sold their farm in Chester... View Obituary & Service Information

The family of Mildred Louise Bridges created this Life Tributes page to make it easy to share your memories.