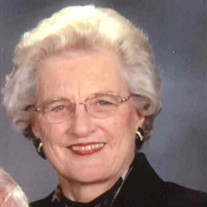 Mrs. Nancy Jane (Cobble) West, of Hohenwald, TN, passed from this life on to her eternal home on Friday, October 23, 2020, at the age of 86. Jane Cobble was born on August 9, 1934, to Reuben Edward and Elizabeth (Norvell) Cobble, in Lynchburg, Tennessee. She grew up in Lynchburg and eventually graduated from Moore County High School. Jane attended Tennessee Technological University and obtained her teaching degree. While at school, she met her best friend and the love of her life, Wilson Baker "Bud" West. They eventually married on April 27, 1956. Bud and Jane West, along with their two children, Mike and Lauranne, moved to Hohenwald in 1964. She was the Home Extension Agent for Lewis County for a short time, but she eventually got a job teaching with the Lewis County Board of Education. She was a beloved and well-respected educator in Lewis County from 1964-1989. In 1989, she retired from Lewis County Schools and went back to Lynchburg and taught for seven more years. Finally, in 1996, she ended her career in teaching after 33 years of changing lives. She and Bud retired to their home in Hohenwald and enjoyed their time together until his passing in 2009. Above all in her life, she loved holding the title of "MaJane," which her grandchildren most lovingly called her. Nancy Jane West will be remembered as an extraordinary woman, full of grace, humility, and class. She was beloved by all who knew her. She is survived in this life by a son, Mike West, of Hohenwald, TN, a daughter, Lauranne West Bates, of Hohenwald, TN, sister, Betty Anne (Mann) Nutt, Hohenwald, TN, Granddaughter, Sophia West, Hohenwald, TN, Granddaughter, Maggie West, Hohenwald, TN, and Great Granddaughter, Ruby Scott, Hohenwald, TN. Her parents and her husband precede her in death. Private services will be held with the family in the coming days. If you wish to make a donation in memory of Mrs. West, the family asks that you do so to the Lewis County Education Foundation, the Lewis County Cancer Victims Fund, or to the Activities Program at AHC Lewis County.

Mrs. Nancy Jane (Cobble) West, of Hohenwald, TN, passed from this life on to her eternal home on Friday, October 23, 2020, at the age of 86. Jane Cobble was born on August 9, 1934, to Reuben Edward and Elizabeth (Norvell) Cobble, in Lynchburg,... View Obituary & Service Information

The family of Nancy Jane West created this Life Tributes page to make it easy to share your memories.