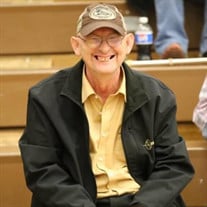 Robert E. "Bobby" Brown was born on June 3, 1957, in Hohenwald, TN, to the late Robert Webb and Mary Elizabeth Brown. He is survived by one aunt, Mrs. Cordie Pulley and husband of Waynesboro, several cousins, many friends, church families, and his co-workers at Peoples Bank. He departed this life on November 16, 2020, at Williamson Medical Center. Bobby moved to Waynesboro after the death of his mother and was well taken care of by Buffalo River Services, Inc. After moving to Waynesboro, Bobby's light began to shine on the whole community. He was an active member of the Waynesboro Rotary Club and the Civitan Club. He attended every event where he could enjoy being around people. He would catch a ride to every ballgame, every wedding, and every church revival and would sing a good gospel song if he could. HE was and avid Tennessee Vols fan and an Atlanta Braves fan. He grieved with every family that lost a loved one and rarely missed a funeral. He attended Waynesboro First Baptist Church where he sang in the choir. Bobby's kindness and love will live in the memory of his grieving community, but his love for his Lord will be remembered the most. In Bobby's own words "You can't keep a good man down!" Visitation with the family will be held on Sunday, November 22, at the Wayne County High School Gymnasium from 11:00AM-1:00PM. Funeral Services will follow at 1:00 PM. Jeff Davis, Greg Eaton, and Tim Hanback will officiate. Burial will follow in the Downey Cemetery in Hohenwald, TN. In lieu of flowers, donations can be made to: William Thomas Helton Foundation P.O. Box 847 Waynesboro, TN 38485 Janet J. Smith Foundation C/O Peoples Bank P.O. Box B Clifton, TN 38425 The Butterfly Foundation C/O Peoples Bank P.O. Box 718 Waynesboro, TN 38485 Civitan Club P.O. Box 714 Waynesboro, TN 38485 It is requested that everyone in attendance wear a mask. First Baptist Church of Waynesboro will live stream the service on their facebook page.

Robert E. "Bobby" Brown was born on June 3, 1957, in Hohenwald, TN, to the late Robert Webb and Mary Elizabeth Brown. He is survived by one aunt, Mrs. Cordie Pulley and husband of Waynesboro, several cousins, many friends, church families, and... View Obituary & Service Information

The family of Robert E. "Bobby" Brown created this Life Tributes page to make it easy to share your memories.