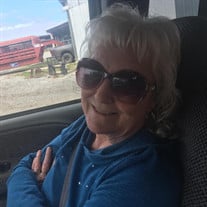 Mrs. Shirley Reeves of Hohenwald, TN, passed from this life to her eternal home on Wednesday, February 23, 2022, at the age of 66. Shirley was born on October 22, 1955, at Dr. Boyce's clinic in Hohenwald to Carlis G McNabb & Gracie L (Anglin) McNabb. Shirley married Leon Reeves and they raised their family and had many wonderful years together. She worked at Walmart in Hohenwald until her retirement. You can ask almost anyone in Hohenwald if they know Shirley Reeves, and most all will say they do. However, they also will say that they love her. Everyone who ever met Shirley loved her. A sweet and genuinely caring person, she made an impact on countless lives throughout her life. She was a devoted wife to Leon. She enjoyed working on the farm with him and spending as much time with him as possible. He was her best friend and the love of her life. Shirley was a dedicated mother. She was always there for her children and was as active as she could be in their lives. Moreso than these two, she was a loving grandmother. Shirley loved her grandkids more than anything and was a constant presence in their lives. She always there cheering her kids and grandkids on in everything they did. Above all, Shirley was a child of God. She and her husband are members of Grinders Creek Church of Christ where they have served God for many years. Today, Shirley stands in the light of her Savior. Along with her husband, Leon, she leaves behind her sons, Gary (Trisha) Reeves of Hohenwald, Keith (Chanda) Reeves of Hohenwald, daughter, Melissa (Kevin) Grinder of Hohenwald, sisters, Vicky Halbrooks of Centerville, Helen Akridge of Hohenwald, grandchildren, Gabriela Reeves, Garrett Reeves, Ariana Grinder, Aleah Grinder, Justin Reeves, Kelby (Caleb) Feichtinger, Kerrigan Reeves, and great grandchildren, Elias Reeves, Ike Reeves, Caylx Feichtinger, and Clayt Fiechtinger. Her parents preceded her in death. Visitation with the family will be conducted on Tuesday, March 1, 2022, from 11:00AM-1:00PM at the McDonald Funeral Home in Hohenwald. Funeral services will be held on Tuesday at 1:00 PM in the McDonald Funeral Home Chapel. Burial will follow in the Odest & Ezore Reeves Family Cemetery. McDonald Funeral Home assisted the family with arrangements.

Mrs. Shirley Reeves of Hohenwald, TN, passed from this life to her eternal home on Wednesday, February 23, 2022, at the age of 66. Shirley was born on October 22, 1955, at Dr. Boyce's clinic in Hohenwald to Carlis G McNabb & Gracie L (Anglin)... View Obituary & Service Information

The family of Shirley Reeves created this Life Tributes page to make it easy to share your memories.

Mrs. Shirley Reeves of Hohenwald, TN, passed from this life to...