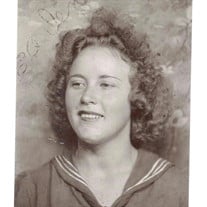 Mrs. Tommie Earlene (Treadwell) Sharp Russell, age 97 of Hohenwald, TN, passed away on Sunday, June 7th at AHC Lewis County. She was born on the 1st day of June, 1923 in Perry County to the late Wesley Albert Treadwell and Sarah Catherine (Inman) Treadwell. She was widowed being preceded in death by Fate Houston Sharp and later in life by husband Posey William (PW) Russell. While most people graduate high school around the age of 18, Mrs. Earlene (as she liked to be called) and her husband Posey didn't. It wasn't until their late 40's or early 50's, when they decided to go back to school and graduate. And so they went back, completing the 18 courses needed to graduate. Hard work and determination made this goal possible as both were still working and raising kids, and so late at night after all the work was done, she and her husband would sit around the table to study. And so it was they were able to graduate and receive their diplomas. Being able to graduate was something they were very proud of and something they would cherish the rest of their lives. Mrs. Earlene had a very good work ethic and spent most of her life working. She put in 25 years at Genesco and another 30 working for Puckett & Maynord's. No one ever knew her real age or her birthday, up until just recently she would argue with you over her real age. She loved sewing, loved home-keeping, gardening and tending to her flowers, she loved to sing and had a beautiful Alto voice, she also to babysit and take care of her children, grandchildren and great grandchildren. She had a heart of gold, and always tended to those that were sick or shut in, cooking and helping all those in need. A celebration of her life will be held on Tuesday, June 9 at 1:00 PM with Joe & Justin Griner officiating. There will be a period for family and friends to share any memories they may have about Mrs. Earlene. Visitation with the family will begin at 10:00 AM on Tuesday and continue until service time. Burial will follow in the Downey Cemetery. In lieu of flowers the family asks for donations to be made to the Salem Church of Christ Mission Fund, in care of Bobby Williams 114 Parkwood Lane Hohenwald, TN 38462. Survivors include: Son Posey (Shirley) Russell, Daughter Patsy (Joe) Griner, Daughter Connie Nolin, Daughter Bonnie Cothran and Daughter Barbara James. Grandchildren: Grandson Justin (Katie) Griner and great grandchild Elizabeth, Granddaughter Tanonni (David) Garner and great children Fayth & Xander, Granddaughter Jinger Griner, Grandson Rusty James, Grandson Ronnie James, Granddaughter Michelle Nichols, Grandson Randy Stutts, Grandson Riley Stutts, Granddaughter Tammy (Dale) Burlison, Granddaughter Laura Runions Mosley, Grandson Ricky Runions, Grandson Mike (Susan) Parker, Grandson Mike Carpenter, Grandson Chad Cothran and Granddaughter Lisa Fransen, along with several other great grandchildren. She is preceded in death by her parents Wesley & Sarah Treadwell, husband Fate Sharp, husband Posey (PW) Russell, Daughter Francis Stutts, Daughter Gayle Runions, Sister Thelma Bryson, Brother Carmel Treadwell, Sister Mary Tatum, Brother Curtis Treadwell and Sister Willie Allen.

The family of Tommie Earlene (Treadwell) Sharp Russell created this Life Tributes page to make it easy to share your memories.