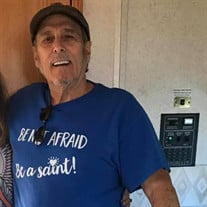 Vito "Robert" Irving Nappi Jr. was born on April 12, 1953, in Miami, Florida ( a place which he loved dearly), and passed away on October 4, 2020, in Nashville, Tennessee. He was 67 years old. He is the son of the late Vito Irving Nappi Sr. and Blonnie Hanford Haytock. He was also preceded in death by his sister Judy Toone. He is survived by his fiance Diane King of Centerville. His sisters Sharon Justus of West Virginia, Vicki Nappi of Florida, and Angel Nappi of Florida. Future Step Children Andrea Smitley of Michigan and Breanna King of Centerville. Many nieces and nephews. Along with many other relatives, friends, Church family, and loved ones. Before retiring, Mr. Nappi worked as an HVAC technician and also a radio announcer. He was a born again Christian. He attended Hope Church in Centerville and was a member of the Rolling Hills Baptist Church. He loved Jesus and shared that love through teaching Sunday School at Rolling Hills Baptist Church for several years. He could be described as good-hearted and a person that enjoyed life. He was a loving brother to his sisters and a wonderful family man. He loved Diane dearly and never failed to let her know that. Robert also loved the outdoors. He kept a garden mainly growing tomatoes and peppers. He also loved camping and fishing, both things he enjoyed from his youth. He and Diane had recently bought a camper and took several trips together. They planned on travelling to various places and sharing their stories with family and friends. They had planned a trip to Florida in December where they were to get married. He loved restoring things and fixing things up. He was an outstanding cook and thoroughly enjoyed doing so. He was excellent at fixing authentic Italian food. His favorite was spaghetti and meatballs. His cooking skills were learned from his father. He loved music, especially contemporary Christian. It was something he played non stop at home. This love carried over into some of his working life as he worked at a radio station. He was also an animal lover. He watched The Incredible Dr. Pol all the time. He always had a dog, the most recent being "Patches". Devin Pickard will conduct memorial services for Mr. Nappi on Saturday, October 10, 2020, at 4:00 p.m. at Hope Church. In November, with a date to be set, a memorial service will be held for Mr. Nappi at Rolling Hills Baptist Church. In lieu of flowers the family has asked that donations be made to help offset funeral expenses. Information about donating can be found here --> https://mcdonaldfuneral.corecommerce.com/pay

Vito "Robert" Irving Nappi Jr. was born on April 12, 1953, in Miami, Florida ( a place which he loved dearly), and passed away on October 4, 2020, in Nashville, Tennessee. He was 67 years old. He is the son of the late Vito Irving Nappi Sr.... View Obituary & Service Information

The family of Vito Irving Nappi Jr. created this Life Tributes page to make it easy to share your memories.