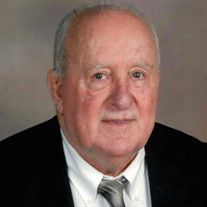 Mr. Wayne Tharp, 81, of Hohenwald, passed away peacefully Tuesday morning at NHC Maury. Wayne was born on January 30, 1940, to Clyde Tharp and Imogene (Poore) Tharp. Wayne grew up in Lewis County and has been a life-long resident. After graduating from Lewis County High School, he began working as a surveyor for the TN Dept of Transportation. In May of 1960, he married the love of his life and best friend, Madelyn Ammons. Soon after, he discovered his true passion-training Tennessee Walking Horses. In 1970, he quit his job as a surveyor for the state and opened Wayne Tharp Stables. He trained and bred Tennessee walking horses for over forty years until he wasn't able to any longer. Wayne was an excellent trainer and won multiple world grand championships at the Tennessee National Walking Horse Celebration. He was also extremely dedicated to his community. He was a county commissioner for twenty-four years. His greatest achievement was when he was given the name "Papa" by his grandchildren, Stone and Sailor. They were truly the light of his world. He never missed an activity that they were a part of. He attended countless ballgames over the years and was their biggest supporter until his last breath. Wayne loved to tell stories and be with people. He also had the best advice for his friends and family. His family has a list of famous "Wayne Sayings" but a the most well known ones would be "Just be yourself, if they don't like you for who you are, they're not gonna like you for who you're trying to be" and the one he said he came up with when he got married "Least said...easiest mended." Above all, Wayne loved the Lord. He was dedicated member of the Hohenwald Church of Christ where he and Madelyn worshipped for many years. Along with his wife, Madelyn Tharp, he is survived by his daughter, Jill (Steve) Selby, sister, Shirley (Joe) Shipp, brother, Mack Tharp, grandson, Stone Selby, and granddaughter, Sailor Selby, all of Hohenwald. Along with his parents, he is preceded in death by his daughter, Dana Michelle Tharp. Visitation with the family will be conducted on Wednesday, November 10, from 1:00 PM-3:00 PM. Funeral services will follow at 3:00 PM in the McDonald Funeral Home Chapel. Glen Floyd and Greg Smith will officiate.

Mr. Wayne Tharp, 81, of Hohenwald, passed away peacefully Tuesday morning at NHC Maury. Wayne was born on January 30, 1940, to Clyde Tharp and Imogene (Poore) Tharp. Wayne grew up in Lewis County and has been a life-long resident. After graduating... View Obituary & Service Information

The family of Wayne Edwin Tharp created this Life Tributes page to make it easy to share your memories.