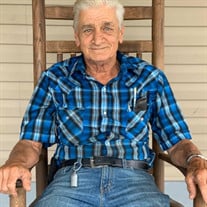 William Eugene Burrow Sr. was born June 26, 1949 to the late George Alan and Justine Elder Burrow, and died October 24, 2021 at the age of 72. In addition to his parents he was also preceded in death by his wife Martha Ann Smith Burrow. He... View Obituary & Service Information

The family of William Eugene Burrow created this Life Tributes page to make it easy to share your memories.